Slipknot are set to bring Knotfest to the UK for the first time ever in 2020, it has been confirmed.

The event, which was launched back in 2012, will hit British shores for a date in Milton Keynes on August 22 next year.

Held at the town’s National Bowl venue, the inaugural Knotfest UK will welcome a headline performance from Slipknot themselves. An announcement of further acts and on-site activities will follow in the new year.

Members of Slipknot’s Outside The 9 fan club will be able to access pre-sale tickets on Thursday, December 19 at 10am (GMT). You can find further information here.

The first ever #KnotfestUK is coming to The National Bowl in Milton Keynes on 22 August. Line-up, on-site activities + ticketing info coming soon. Outside The 9 Fan Club pre-sale begins 19 December. 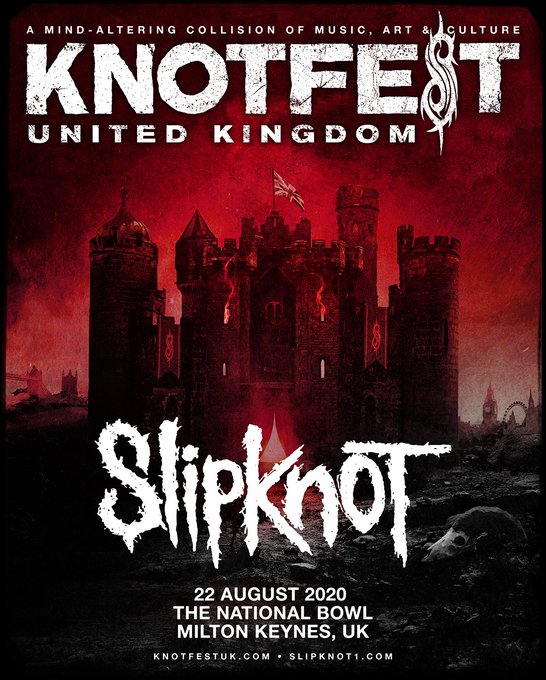 184 people are talking about this

Knotfest has expanded into five countries – Japan, Mexico, Colombia, France, and the UK – since it began seven years ago.

In August, the band’s Shawn ‘Clown’ Crahan talked to NME about the possibility of bringing the event to the UK in the future.

“It definitely will happen but it has to be the right thing,” he said. “Right now we do a lot of festivals with a lot of great people and you’ve got to find a time and a zone and it’s got to be right.

“We don’t like to go and mess things up; it’s not about that. It’s about being righteous and pure and it being what it is.”

Today’s announcement comes after Slipknot confirmed an expansion of Knotfest events with a new cruise for next summer. Taking place in August, ‘Knotfest At Sea’ will depart from Barcelona, Spain and will feature two onboard performances from the band.

Slipknot, meanwhile, have been named the most-listened-to group for listeners who are feeling angry, according to a recent study.

Originally posted by Vinyl Factory Lidl has made its first foray into the world of vinyl. The German discount supermarket chain is now stocking an all-in-one ION record player. Available for £49.99, the deck features […]

Marvel Pays Tribute to some Rock Gods! Taken from Movieweb. Over the years there have been many comic books published where they have told the store of rock bands, be that true stories or just […]